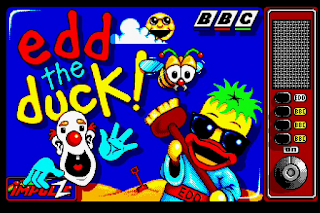 If you were a child of the mid-to-late 1980s or early 1990s and you grew up watching Children's BBC, you may remember The Broom Cupboard. In broadcasting-speak, The Broom Cupboard was an in-vision continuity studio situated somewhere in BBC Television Centre. It was basically a little room where presenters provided information about other BBC shows for kids, interviewed celebrities, announced competitions and provided introductions and links into other shows. Arguably, The Broom Cupboard became more famous than the programmes themselves, and gave several presenters their first big breaks into broadcasting. The Silver Fox himself, Phillip Schofield, found fame from the Broom Cupboard, as did Andy Crane and Andi Peters. Amongst the clutter of the Broom Cupboard (pictures, props, toys, monitors, illuminated signs), Phil, Andy and Andi shared their little studio with puppets, who became personalities in their own right. A young Phillip Schofield was accompanied by Gordon the Gopher, perhaps the most well-remembered of the Broom Cupboard puppets. Even today, he still makes appearances on TV, and recently appeared as Phillip's co-presenter on Dancing on Ice, a vast improvement on Christine Bleakley.

Gordon and Phillip went on to present Going Live on Saturday mornings, leaving a couple of empty places in The Broom Cupboard. Andy Crane filled the presenter's seat, with the puppet's chair first occupied by a banana, called Ben (or Bobby), and later a duck with punk green hair. That duck was Edd the Duck. A huge fan of Kylie Minogue, Edd the Duck spent several years in The Broom Cupboard, assisting Andi Peters with presenting duties after Andy Crane departed. For the BBC, he was fantastic, as his image could be licensed to appear on all kinds of merchandise to fill their coffers even more. Inevitably, and rather handily for this blog, one of the licensed products was a computer game. Edd the Duck's game, called Edd the Duck! appeared on several home computer formats. And today, we shall look at the Amiga version.

In Edd the Duck! you control Edd through various TV-studio related levels. Levels are based on the weather department, although there is no Michael Fish in it to deny any forthcoming hurricanes, special effects department and children's TV department (quick fact: The Broom Cupboard was used as an emergency news studio during the "great storm" of 1987, as it was the only studio at TV Centre with power!). On each level are a number of stars. Edd must collect all of these stars to complete each level. Quite conveniently, a counter at the bottom of the screen tells you how many stars are left on each level. Levels on Edd the Duck! scroll vertically, with Edd starting at the bottom of each level, working his way upwards a la Rainbow Islands. Oh yes, the influence for this game is quite obvious, with the only thing missing from this being the rainbows themselves.

Each level features a number of enemies. These cannot be killed, but they can be frozen, literally, by throwing snowballs at them. This stops them from moving and makes them harmless, although this is only temporary. When the snow melts, they begin moving again and become fatal to the touch. Put simply, the idea of the game is to collect stars and avoid enemies.

Edd the Duck! is presented really well, with some nice pre-game screens, intermissions, a good game over sequence and leader board. Graphically, it's all very nice and colourful, with well-defined cartoon-style sprites, detailed platforms, and a general feel of overall quality. Sound-wise, the music is terrific. There's only one tune that plays throughout the game, although this is actually quite a good, catchy tune, sounding very Children's BBC in style, and there is nice intro music, game over and leader board music too. There are no sound effects to speak of, but all in all, the game's presentation is all quite nice and jolly and captures the TV studio context well.

Onto the gameplay, and again, it's not too bad. Edd moves at a good pace around the levels, and responds quickly to your instructions. One of the problems comes when jumping as it isn't possible to make Edd move when in mid-jump. The makes precision-landing quite difficult and causes the game to become frustrating in parts. This results in you taking your time and freezing all enemies in your path when it comes to attempting to reach stars in their vicinity, rather than relying on well-honed arcade skills to leap and jump wherever you want. This flaw is what gives the game its main challenge, as I suppose it would actually be quite an easy game if the controls were better. This is because, other than enemies scattered around the level, there is nothing else to cause you any problems. Edd can survive any fall, there's no rising water level to put pressure on you to hurry up, there are no dangerous inanimate objects, such as spikes, and there are no end-of-level bosses. Yep, the iffy jumping method adds challenge to the game, but takes some of the fun out of it. With better controls, the developers could have added various other features to the game to make it more of a test of gaming ability.

Another problem is that the game is quite short. There are only the three levels (weather, special effects, kids TV), each split into three stages. And the first level and the third level look fairly similar to each other. It is possible to get through the game quite easily, just by taking it one bit at a time, freezing enemies, collecting a star, and then moving to the next bit. But, doing it that way isn't much fun and you'll end up trying to whizz through the levels, but failing to get very far because the jump control isn't that great and it's all too east to accidentally jump into an enemy. Given that the game is obviously aimed at kids, I can't imagine that kids would get much pleasure out of it as they aren't exactly known for possessing much patience!

Edd the Duck! feels like a game that could have been so much more. A little extra work on the controls, and a few extra features, and it could have been a minor classic, maybe even giving Rainbows Islands, the game on which is it obviously attempting to cash-in, a run for its money. Instead, it remains a nicely-presented, moderately fun little game which will keep you amused for a short while.

Presentation: 90%
Nice loading screen and intro screen, with polished intermissions and leaderboard.
Graphics: 83%
Clear and colourful, with attractive cartoon visuals, good animation and, on level two, a nice background.
Sound: 85%
The Amiga's sound chip provides some great tunes, although it would have been nice to have different music for each level.
Playability: 76%
Easy to pick up and play, but suffers just because Edd can't change direction when jumping, and can get frustrating.
Overall: 78%
An enjoyable platform game, but missing a few elements that could have made it amazing.

Edd the Duck! elsewhere
Being the worldwide superstar that he was, Edd the Duck made appearances on a few other computers at the time. In addition to the Amiga version above, he also graced the Amstrad CPC, ZX Spectrum and Commodore 64 with his presence. I gave the Spectrum version a go, and found that Edd is actually able to move while in mid-air in it, which makes controlling him a little easier. However, apparently this version of the game isn't possible to complete due there not being enough stars in one of the levels (the counter wants you to get 20, but there are only 19 on the level). A poke fixes this, but it does make you wonder what kind of playtesting went on before releasing games back then!

Here's a video of the game in action...