Mining and diamonds seem to be a common theme in computer games of old. Games like Boulder Dash for example and, er, um, Manic Miner. Not too sure we saw Miner Willy doing any actual mining in it though. I suppose you could count Jet Set Willy too as it featured the same character. Oh well, maybe mines and diamonds aren't that common a theme. Perhaps the black backgrounds that were a feature of many 1980s computer games made me think they were all set in mines, and I suppose diamonds were fairly easy to draw so they also seemed to pop up quite a bit in old games.

Anyway, a game that was a fusion of the less-common-than-I-thought themes of mining and diamonds was Diamond Mine, a game released in 1984 for the Acorn Electron by MRM and again the following year by Blue Ribbon. Oh wait! There was also Mineshaft, also released on the Acorn Electron. Another mining game! We're not looking at that today though. We're also not looking at Diamond Mine either as it is pretty much impossible to play. Instead, we're heading straight for its far superior sequel, Diamond Mine II which Blue Ribbon also released on the Acorn Electron in 1985, as well as a few other machines which I may come onto later if I remember.

As its title suggests, the idea of Diamond Mine II is to mine diamonds. And like many games in the 1980s, the mines takes the form of maze-like levels. You simply have to clear the diamonds from the paths in the mazes. You do this by guiding a pipe through the level. If you touch your own pipe or attempt to go backwards on yourself, you lose a life. You can however retract your pipe, a necessity to get through the game. The pipe retracts for however long you hold down the relevant key, which is Return in the Electron version.

Making life tougher are nasties which take the form of mutant eyes. These eyes move horizontally through each level and are also able to travel through walls. You can suck them up your pipe but if they come into contact with any other part of it, it's another life lost. Sucking them up is only temporary as a few seconds later they're back! If this happens when you're clearing a completely different part of the level, you need to retract and suck them up again. Part of the beauty of the game is seeing how much you can clear before retracting, whether to be daring or over-cautious? As moving your pipe through the levels and retracting it uses energy, you need to be careful that you don't retract too often or waste too much time making a decision, so playing too safe isn't always a good idea. So you need to keep an eye on your energy levels as well as the wandering eyes. I once went out with somebody with a wandering eye. Had to end it though as I thought she was seeing somebody else.

Controls for the game are simple. You just have up, down, left and right and the aforementioned retract key. At first, movement feels a bit sluggish but as you get into the game, the speed is just right. Clearing objects from mazes is a concept lifted straight from Pac-Man, but there are enough extra elements to make this a different kind of game. Levels quickly get tough and really do test your skills. It's sometimes frustrating to lose a life by accidentally going back into your own pipe, but this often happens when you're under pressure. Like a lot of 80s games, you need to combine skill with strategy and this game balances the two well.

Graphics do a good job too. Levels are colourful and clear. Your pipe makes a chomping noise as it collects diamonds and there are suitable sound effects for deaths, bonus points and the like. The only music is a little tune which plays when you start a new game. Fortunately it doesn't play throughout as it would quickly get annoying. Like the graphics, the sounds suit the game. In fact, everything about this game just feels right. Although the game isn't up there with the all-time greats, and doesn't feel as frantic and as fluid as other arcade style games, Diamond Mine II is a good game if you're feeling like a quick challenge. It's also quite addictive too and leaves you knowing that you could easily do better if you just have one more go.

RATINGS
Presentation: 65%
Nothing too exciting but they do the job. The Blue Ribbon corporate loading screen is followed by the game's name, writer and copyright info on background of changing colours.
Graphics: 83%
The game is colourful and it's clear to see what's going on. The diamonds are just dots of changing colours, while the game's only sprites, somebody bouncing at the top of the screen and the mutant eyes, are well-drawn.
Sound: 70%
Suitable sound effects with a short melody when you start the game.
Playability: 82%
Easy to pick up, hard to put down. Fun to play without being overly frustrating.
Overall: 81%
A great little Acorn Electron arcade style game, something to return to again and again.

Diamond Mine II wasn't an Electron exclusive. Oh no, not at all. It also made appearances on some other home computers too, although for some reason didn't make it to the Spectrum or C64.

The BBC Micro version is almost identical to the Electron version, save for better sound and a different loading screen. It plays a bit smoother too. The game is also fairly similar on the Amstrad CPC, although features a different opening theme tune. Movement on this version is fluid like the BBC version although the eyes seem to regenerate quicker meaning there is more retracting of your pipe needed, so doesn't feel as fun.


The game was also released for the Commodore 16 and Commodore Plus/4. The Commodore 16 version, although it features the same concept of gathering diamonds with a retractable pipe, uses a different level layout and isn't quite as enjoyable to play. There are a larger number of enemy eyes which, like on the CPC, cause you to have to retract more often. This just makes the game feel frustrating. On the Plus/4, the level structure of the Acorn machines and the Amstrad are the same. However, although the pipe flows smoothly, you need to be in exactly the right place above or below a vertical path to be able to move you pipe along it. This again breaks up the flow of the game. An MSX version was released too, but I haven't taken a look at that one.

The BBC Micro version is the best of the bunch with the trusty Electron version a close second. 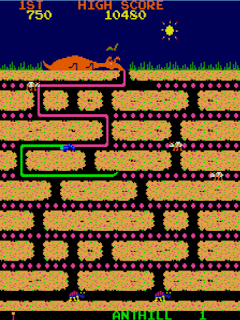 Diamond Mine II wasn't an original game. Instead it was based on a little known arcade game called Anteater from Tago Electronics whose only other release appears to be a game called Calipso. I have to say I have never heard of either. Instead of piping your way through a maze to collect diamonds, Anteater features an aardvark with an extendable snout which sniffs its way around similar mazes, collecting ants and worms. It is quite infuriating to play and it's little wonder that it isn't a well known game now. An unreleased port was apparently created for the Atari 2600, while the only other versions for other devices are clones. Aardvark was a very close remake, released for some of the Atari and Commodore machines of the early 80s, while Oil's Well from Sierra On-line and Diamond Mine II were clearly influenced by the gameplay of the Anteater arcade game.

Want to see Diamond Mine II on the Acorn Electron in action? Of course you do. Head on over to our YouTube channel to see it! Or view it here in super-tiny vision.