To celebrate the birth of Prince George, the first child of Duke and Duchess Cambridge and the boy who will one day be King, here are some right royal retro games featuring babies. But not royal ones. 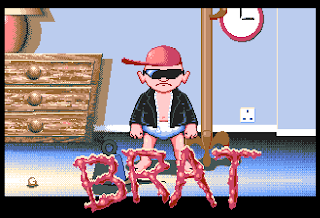 Brat
Atari ST, Commodore Amiga (Image Works, 1991)
Released for the Atari ST and Commodore Amiga, Brat is a baby who needs direction, and probably some love and affection. If not, he'll probably get some sort of attention deficit disorder and in twenty years time will become some sort of vigilante computer hacker. In this game, Brat walks in a straight line on a suspended landscape. It is your job to ensure that he doesn't fall off the floating world that he inhabits or come a cropper by hitting any of the obstacles that get in his way. You do this simply by placing objects on his route, mostly direction arrows which tell Brat which direction to take, but there are some other items to place which can be used to combat some of the obstacles. The game is a bit like an isometric Lemmings, quite a simple idea and well-presented, but unfortunately hard and frustrating to play due to being very unforgiving if you make mistakes. Brat is also one of those annoying kids wearing sunglasses, a leather jacket and a sideways baseball cap, a style that has never ever been cool. 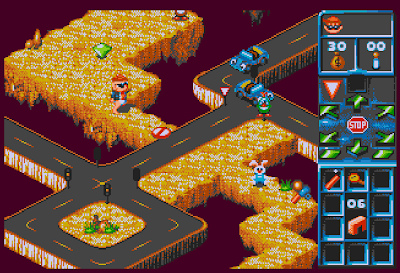 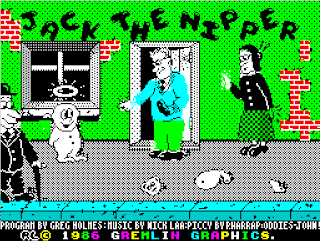 Jack the Nipper
ZX Spectrum, Commodore 64, Amstrad CPC, MSX (Gremlin Graphics, 1986)
Taking the role of a trouble-making toddler, you get to explore various comic-book style locations with the aim to cause as much madness and mayhem as possible. If Grand Theft Auto was a 8-bit computer game featuring babies, then this would have been it. 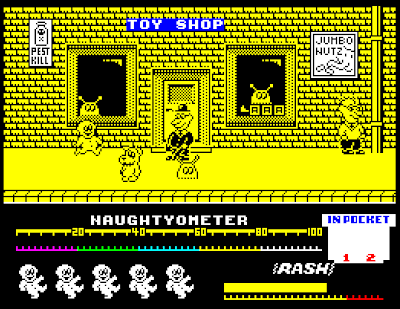 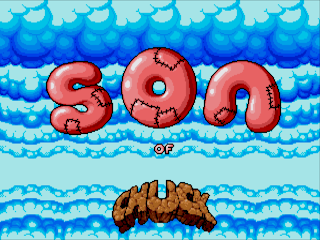 Chuck Rock II: Son of Chuck
Commodore Amiga, Amiga CD32, Sega Master System, Mega Drive/Genesis, Game Gear, Mega-CD (Core Design, 1993)
A side-scrolling platform game featuring Chuck Rock's son. He doesn't quite have his dad's belly yet so defeats enemies using a club. Pretty standard platform fare from a time when pretty standard platformers were abundant. The graphics and sound are great as you'd expect from a Core Design game, but the game itself was lost amongst its competition so is probably not so well-remembered. 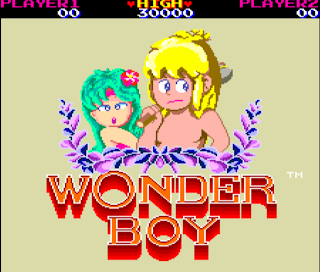 Wonder Boy
Arcade (Sega, 1986), Sega SG-1000. Sega Master System,  Sega Game Gear (as Revenge of Drancon in USA), ZX Spectrum, Commodore 64, Amstrad CPC, Mobile Phone, Wii Virtual Console (rerelease of Master System version)
Also released as Adventure Island on Nintendo Entertainment System, MSX, Gameboy Advance, Gamate, Gamecube, PlayStation 2, Wii Virtual Console (release of NES version)
We're not sure if Wonder Boy is a baby or just a kid who hasn't yet been potty-trained. Whatever he is, he roams dangerous landscapes wearing a nappy while throwing axes at enemies and beheading end-of-level bosses like some sort of crazed loon in a quest to rescue his girlfriend Tanya. On his journey, Wonder Boy picks up fruit and milk for energy and dolls for bonus points. Sega's Wonder Boy was a fantastically playable arcade game which was converted to consoles and computers aplenty. It was renamed Adventure Island and slightly altered for the Nintendo and MSX. Both Wonder Boy and Adventure Island then continued as two separate gaming franchises with numerous sequels. Whereas Wonder Boy follow-ups became more adventure-based, Adventure Island sequels stuck to being arcade-style platformers. 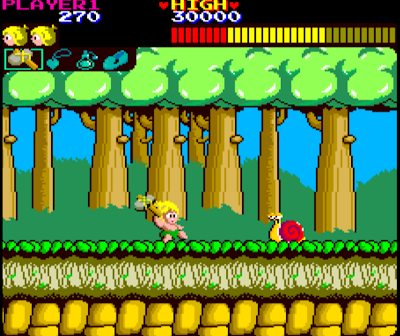 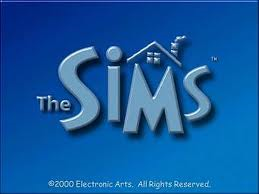 The Sims
PC, Mac, PlayStation, Xbox, GameCube (Maxis, Electronic Arts, 2000, 2003)
EA and Maxiseseseses' life sim gave gamers the ability to direct virtual human beings through their day-to-day lives. From the mundane events like emptying the bin and going for a wee (or just leaving them to piss themselves) to major life events like getting a job or building an extension on your house to turn it into a games room. Another large part of the game was forming relationships, especially romantic relationships. You could get your Sims to fall in love by flirting, chatting, telling jokes, dancing or attempting a sneaky kiss. Once your Sims had taken that first step in the path of romance, it doesn't take them long to decide to have a baby. After making the decision, the conception, pregnancy and birth happens in seconds and a baby in its basket suddenly appears in your front room. The game then becomes all about looking after your virtual sprog, feeding, changing and cleaning them in the hope that the authorities don't come knocking to take it away. So, if you want to imagine what life is like for Will and Kate, create your own make-believe Royal couple and get them to have a baby. 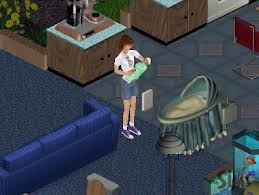 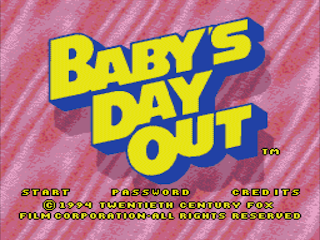 Baby's Day Out
Sega Mega Drive/Genesis (Hi-Tech Entertainment, 1994)
According to movies in the 1990s, parents were shite. They always seemed to forget their kids. The McCallisters managed to lose Kevin twice in two Home Alone films, and in Baby's Day Out, some infant went for a jolly by itself. I guess anyway. I've never actually seen the film in full. A game based on the film Baby's Day Out was programmed for the Sega Mega Drive/Genesis but was never released. In fact, the game was never actually finished, but what does exist of it - you can find it online if you know where to look - is a heap of stinking crap that probably couldn't have been salvaged and turned into anything worth playing. It might explain why a completed version was never put onto a cartridge. The idea of the game is to guide Baby to the exit of each level. You do this by controlling what looks like an angel, who opens doors, moves objects, and basically makes the route safe. The controls are horrible, gameplay is completely unintuative, the graphics dull and depressing, and I don't think there's any sound to speak of. Or I'd forgotten to turn on my speakers when I played it. 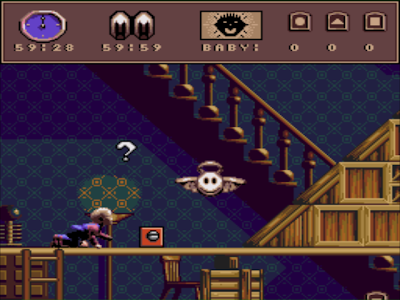